You are here: Home / Trip / Two trains, A Coach and a few incidents (or how I got home and back for Christmas)

Whilst this doesn’t fall into the traditional trip reports, it does fall into the category of travel that I specialise in at GhettoIFE – mad and creative. Join me as I spend a few days at my parents… and be held at the whim of train and coach companies, as well as the great British Weather…

Somehow or other, my planning does suffer sometimes. This included this Christmas period, where I would be travelling down on the 24th December, and heading straight back on the 26th December, so I could be back at my console in the office on the 27th December.

A few days before, there were major storms that started to whip up in the UK, causing major damage, wind damage, forcing train operators to change their plans – mine too as I realised with a horror that I might not actually be able to get home without a minor miracle.

That came the next day, as conditions improved in the Midlands and North of London area. Whilst things were improving – they were not what I’d call “ideal” for travel, with the gusts still causing issues on Christmas Eve. Although Nyan Cat was enjoying the rainbow (www.nyan.cat)

By 3pm, I made the call to go from my office, first heading to West Bromwich, and onto the tram to head back to Birmingham. Thankfully, whilst the rail lines were suffering delays, the Metro was running a normal schedule. The tram ride was reasonably quick, with a 15 minute ride from the heart of West Bromwich to the business district in Birmingham. Conditions outside weren’t bad… but not ideal. Still, I had managed to cut across from Snow Hill to Moor Street with enough time to make my connection to a Chiltern Mainline service… that was today, operated by a real train as opposed to a Diesel Multiple Unit – or in UK train parlesseance a Class 67 Locomotive with five Mark 3 trailers and a Driving Trailer van. The upside being Mark 3 coaches being extremely comfortable for a long trip. Chiltern Railways spent time refurbishing their coaches, so they new seating and perhaps most visibly – plug doors as opposed to the slam-door stock. The seating is a mixture of table seating and airline style seating. Suffice to say, the train was lightly loaded for the trip to London, which would call at Solihull, Warkwick Parkway, Leamington Spa, Banbury and Bicster North – then fast to London. Pulling out of Moor Street.

The train pulled out on time, and even though there was flooding on the line, the train really didn’t slow down until it hit the outer suburbs of London, with the train pulling ten minutes late – nothing really in delay terms.

For my next task it was a matter of negotiating London Underground – which on Christmas Eve is pretty quiet.  A ride down to Baker Street, and onto Liverpool Street on the Metropolitan Line. All quiet on the Met…

However, after clearing the barriers at Liverpool Street, there was a surprise waiting – and not a pleasant one at all What a sad thing to happen… at all times at Christmas Eve too.  The location where it occurred is on the main line of the Great Eastern Mainline, which jammed up traffic in Essex, Suffolk and Norfolk, with traffic backing up both ways. Whilst the waiting was ongoing, I was in contact with my loved ones and hung tight until the trains begun moving. After the investigations had been complete, the fast lines were re-opened, with two expresses to Norwich sent off first. A call for a semi-fast service was made, calling at my home town – allowing me and a lot of people to board. As soon as the train was reasonably loaded, our Siemens Desiro Class 360 was sent on its way, making the journey in a reasonable time. Whilst there was a slow-down of the incident area, the train soon reached my home town.

Soon, I was at home, and in time to celebrate Christmas with my family. As short as Christmas was for me, I had to be back at my desk on the 27th December – and the rail network out for two days, my parents kindly dropped me off at Epping Station, the most easterly point of the Central Line, so I could head to London.

Thankfully, there was a tube train waiting, as there was a 10-15 minute frequency at the extreme end of the line. One of the apps I have on my phone (TubePro) tells me the best place to change for a tube train. As I’m changing at Oxford Circus for the Victoria Line, I need to be in Car Number 1 – saves hiking down the platform, and fighting crowds… All quiet so far… (that will change!) Doors closing! Off we go!

Let’s face it – this bar none is the slowest way to get into Central London. From a set-off time of 12:10, it took the best part of an hour plus to get to Victoria.  But when there’s no other way, you go the way the wind blows… 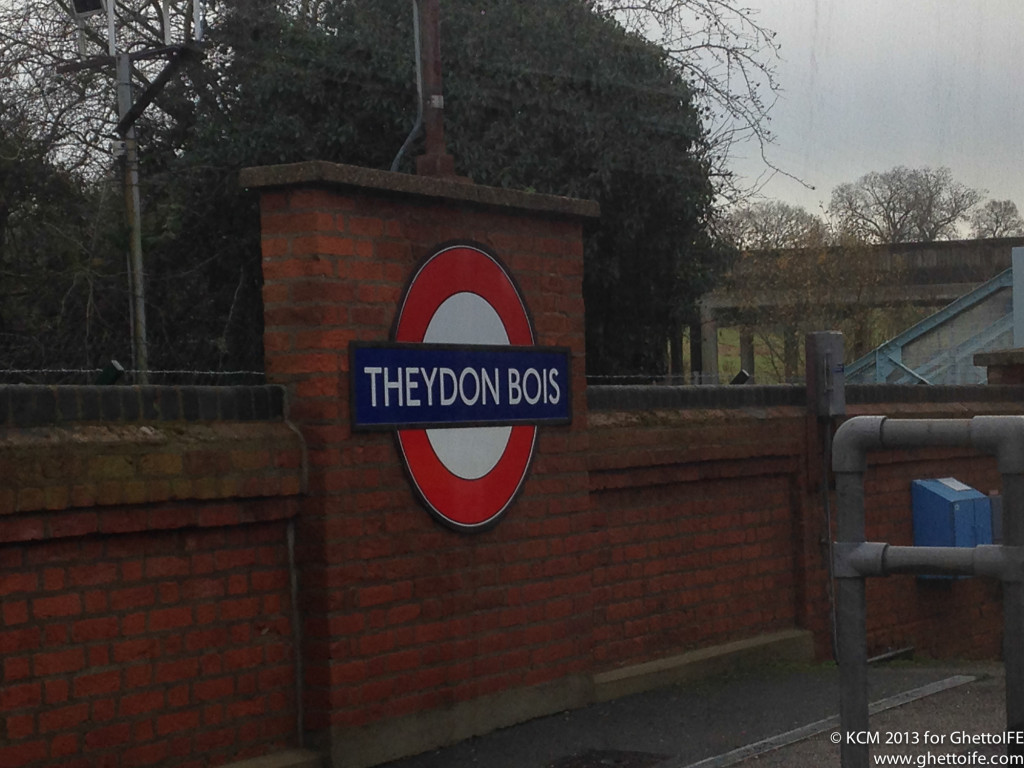 Avoiding Penalty Shunts where possible (Refer to both Mornington Crescent threads in the BMI forum and in FlyerTalk OMNI Forum. Sadly, Theydon Bois this is a legal move in this case…)

As the train closed in on central London, it filled up to what I’d call “normal” rush hour capacity… or to put it lightly, it was crammed in the lead carriage by Stratford, only emptying at Oxford Circus – where I had changed. Thankfully, my app prediction was correct, and I spilled out of the tube train, and headed for the Victoria line for the short hop to Victoria station.

Whilst the Victoria line wasn’t as busy as the Central, it was well patronised for a bank holiday. Still busy, full of shoppers with their sales bargains

At Victoria, I headed for the exit – and for the Coach station. Outside the station, there were plenty of confused travellers expecting the Gatwick Express operating, only to be told to head to London Bridge. Those who persisted, headed to the coach station, where there was a steady stream of travellers in both directions with wheely cases.

By the time I arrived at Victoria, I was a full 1 hour 30 early for my coach. I therefore queued up to change my ticket for the next coach at 14:00. I was lucky, as there were people queuing up for a coach to Gatwick, to be told the next coach was at… 17:00 (bear in mind it was close enough 13:40 by the time I got my ticket changed).

Still, for a £5 change fee, I was accommodated on the next coach to Birmingham. With that done, it was a hike to Gate 17 where my coach would be departing.

And like airports, even coach stations have gate lice. The coach was one of National Express’s more modern coaches, and had capacity for 48 passenger – and only 30 on the direct service to Birmingham this day. That suited me, as I had a spare seat next to me.

A bit later than scheduled, our coach pulled out. But before we could hit the Motorways, the coach had to negotiate Central London and suburban London. This is easier said than done as our coach had to cross Oxford Street – with the sales queues queuing.

I’ll give you one guess which shop people are waiting for in the photo below. Those of you who guessed “Next” (a UK Fashion chain), you’re wrong. It is in fact… PRIMARK (the discounted clothing store) Really sums up the UK today – anything for a “bargain”

The coach eventually made its way out of Central London, onto the Finchley Road, and out, striking out for the M1, and then the M6. I took the time to catch up with some downloaded TV, before falling a sleep for an hour or so.

By the time I had fully woken up, the coach was on the M6 for the final leg home, the day long turned into night. Still, whilst I didn’t put the seat in recline, it was a comfortable ride back to Birmingham.

However, the bus network in Birmingham was not a comfortable ride, with arguments, moans and whining – and that was just a bus driver.

Eventually, I negotiated a couple of buses, and finally wound up at my front door… an adventure home complete. At my front door again.

Nearly all transport providers (National Express, Chiltern Railways and Greater Anglia), did a good job under the circumstances – be it track conditions, people doing the unthinkable and traffic being traffic). But more importantly, those transport connections allowed me to do something more important – connect with those who I love.

And at Christmas – that’s the most important thing. That, and getting back in time for work also helps too.

And £50 or so I spent getting home and back? There’s 75 Diamond Club miles at least there. Better than a kick in the teeth.

That’s that. A quick travel monologue compared to some of the stuff I write. Don’t worry – those of you who want long and detailed reviews, hang tight – I’ve got a special coming in January/February…

Look out for The Final Push sometime in the new year… with a few surprises thrown in!