Time for a two-for-one snapshot – involving British Airways. With the service identical between Heathrow – Hamburg – Heathrow, I’d thought I would lump them together, with the differing experiences on the ground.

Terminal 5 remains a reasonable hub to go through. Not bad, but not excellent. At least security wasn’t 10 miles long. I swear sometimes it’s quicker to enter the United Kingdom, clear customs, go back upstairs and re-clear security at the top than use transfer security. Heading to the North Lounge Or something a little stronger? Getting a seat was fun enough. The lounge was pretty packed. The bigger problem I had, was finding a power outlet… and that was a troublesome find to find one in the North Lounge.

Boarding: At least it was from A17 and not A10 (that’s seemed to have cursed me way too much in recent trips). It was busy – mainly as a lot of airline executives and people were leaving a city in a hurry after a trade show. Check in was conducted quickly, with additional security queues opened up. Hamburg has two lounges – a lounge for Emirates Passengers and one for anyone else (Elite Membership/Pay Lounge. Some impressions: A good view of the apron… Drinks bar, Hot-dog station… and magical soup machine. We’ll get to this in a second. The star of the show – a soup machine. Press button, soup appears! A choice of Tomato, Asparagus and Mushroom For semi instant soup out of a machine… it wasn’t that bad. Not restaurant quality, but it was quite nice.

Boarding: Boarding was from the non-Schengen zone at gate B31. You have to clear passport control. To say the queue was “elite heavy” would be an understatement, with boarding taking time.

Heathrow to Hamburg: Airbus A320
Hamburg to Heathrow: Airbus A319

And they all look like this on the inside: 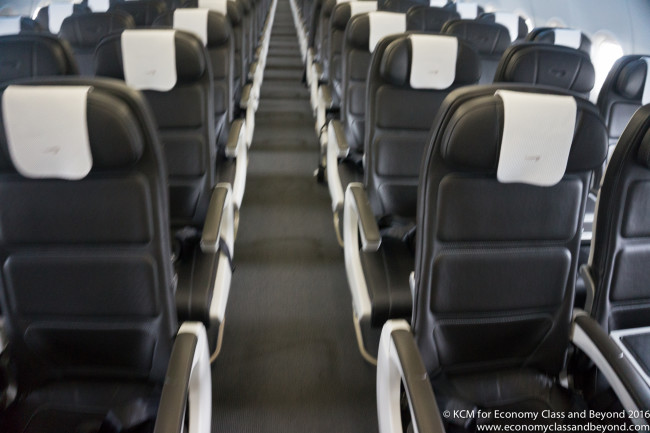 Yes – It’s the wonderful B/E Aerospace Pinnacle seat. If you were press at Aircraft Interiors Expo, this all you probably saw unless you were lucky.

Heathrow: 35 minute delay to get from the gate to the runway (I slept through it…)
Hamburg: Taxi out, and off we went… Climbing out of Heathrow Climbing out of Hamburg.

The same both ways: Ham roll and Cola. And I’m not making this up… it was exactly the same. I believe there was an option for a cheese roll if you asked nicely enough. Heathrow: Off 27R, and a taxi straight to the gate at the A Gates
Hamburg: Off the runway, turn left, and taxi to the gate

Both flights on time. Coming into the A Gates at Heathrow, with all the British Airways tails at the gate.

The full reviews in the next few weeks!