Well this week the Paris Air Show is off and running.

Obviously, I’m not there (my purse strings are limited y’know), so I’ll be analysing some of the stuff coming from Flight International, Cranky, and a few other sources to make some sort of sense of whats going on in the world on In-Flight Entertainment

Lets look at the free entertainment first – the world out of your window.

PPG seem to be developing it’s controllable electrochromic systems. Now in English, that’s simply dimming the windows by remote systems as opposed to pulling down a blind. Sounds famliar? Yes – it’s the same technology as will be appearing on the 787 (which might fly this month!) and also in ickle private jets.

A nice technolgy from blinding people (and defiantly fun to control the light), but how will this feel in the air? I’m not sure. Oh well. Like the world needs simple blinds as it is….

Meanwhile, people seem to have some money and dread the thought – going out and BUYING aircraft. Seems as some people are preping for the upturn already.

So lets do graphics: 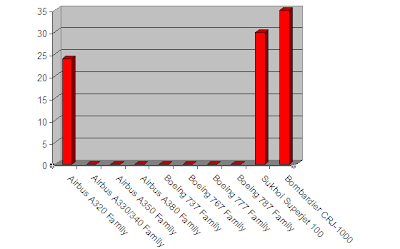 Update #2
Well well well! It looks like these QR A320’s are having IFE installed! According to the documentation, it’s by Thales, and it appears from the mockups appear to be a touchscreen interface. For a short to midrange aircraft – very impressive setup.

Now this is impressive for a midhaul operation. Something QR’s competitors definatly to take note of. The seats should be retro-fittable into any A320 class aircraft, so if its a matter of wiring and cost – with possible inseat txt and emailing capabilities – then there’s a winner here for all…