You are here: Home / Uncategorized / Paris Air Show Day 2: More Orders… and what about IFE

Welcome to yet another review of day to at Paris

… and if we’re blunt, not a lot from those IFE units and suppliers today. However Thales (who are providing the IFE on the new QR birds) seem to have a new weez… Wireless IFE

Of course, wireless seems to be one of those buzzwords, so we’re looking at wireless in terms of Cabin control and systems. Of course – pumping all those bits and bytes across a LAN the size of an aircraft requires cabling.

Neither Thales and Panasonic seem to be new to this as Boeing spec’d it into the 787 – which of course was popped out when Boeing ran into a few little issues.

Here’s a hint: there’s work to be done – least of all bandwidth control. Don’t expect it in your next plane for some time… 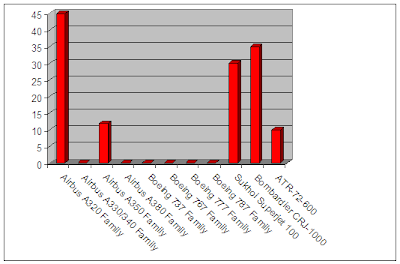 Obviously someone hasn’t told Air Nordstrom there’s a downturn on at the moment – but as they run CRJ-200’s, ATR’s probably could be considered an upgrade probably.

On the Boeing front (who are strangely quiet – probably all the fun with the 787 due for take off at the end of the month), there seems to discussions regarding either re-winging the 777, moving towards 787-10 or even a clean-sheet design.

There’s logic on all fronts – 777 re-winged means the use of a perfectly good body with fancy new wings, 787-10 (an easy follow-on) or Clean-Sheet (which will give spotters something to wet themselves over) – so it’s down to what is the commercial consideration of working towards these new models – and how does Airbus’s A350-800/900/1000 fit into the picture?