You are here: Home / Uncategorized / Tuesday SoapBox. Daily Mail – GET YOUR FACTS STRAIGHT!!!!

Yes, I know. The Soapbox is a bit late this week – so it’s a double entry today.

And today’s soapbox entry is about an entry from “Back to Basics Britain, “Middle England,” “Angry from Tonebridge” and “conservative with a small c – honest ” the Daily Mail (also known as the Daily Hate)

Here’s the article that sparked my ire… 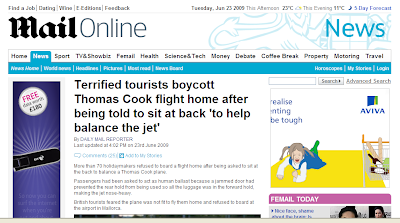 So lets go for the shock horror panic of a badly researched story (what the Daily Mail doing bad research… never. Oh wait. Of course. It’s the Daily Mail!)

Lets work through the choice quotes of this report

“Passengers had been asked to act as human ballast because a jammed door had prevented the rear hold from being used so all the luggage was in the forward hold, making the jet nose-heavy.”

Ok. So there was no engineering support to get the other door open. Luggage was loaded on the from hold. Big whoop. Shift the passengers around for load purposes – not uncommon.

“British tourists feared the plane was not fit to fly them home and refused to board at the airport in Mallorca.”

Well that explains a lot. They’re British! They deserve better service and not being shoved around the plane!

“Some of those due to depart said that holidaymakers who had just landed in the jet warned them not to board it, saying they had just had the worst flight they had ever experienced.”

Hmm. So no news on how weather was, what turbulence there could had been or what actions the pilot and crew took? One sided reporting there possibly?

Ladies and Gentlemen.. and chavs – may I refer you to your conditions of carriage that state what can happen. This was within in.

“Rowen’s mother Hazel said: ‘It was like they were being asked to fly in something that was being balanced out like a seesaw.”

Well this happens when they’re loading a plane with cargo and luggage. You need to balance and keep things in trim. A seesaw is probably a better analogy than some. Of course, I haven’t mentioned that a centre of gravity is important.

“Thomas Cook today said the seating move was routine and posed no safety risk.
A spokeswoman said: ‘It is standard for all airlines to ensure cargo and passengers are evenly distributed on an aircraft and there will be times when passengers will be asked to move to the front or back of a plane.
‘We are disappointed that despite reassurances from the captain and crew, a number of passengers decided not to travel.'”

So basicly what is Standard Operating Procedure has been turned into a farce by the Daily Mail.

Wait – hasn’t this happened before – Ah Yes. When XL had a few issues and posted a picture of a 767 when it was a 737 that had a problem.

You know a little research never hurts. Like this article at wiki about http://en.wikipedia.org/wiki/Weight_and_balance

The BBC has gone slightly less sensational, and presents the facts… 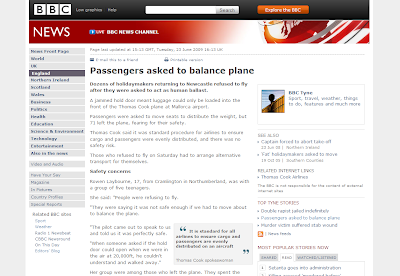 NOW THE DAILY MAIL – YOU’LL TOO LAZY TO READ THIS BUT REPORT THE FACTS AND NOT THE FICTION. LEARN ABOUT A COMPANY BEFORE REPORTING IT.