Note: I was going to publish this last week but I got distracted by a few other things. A few more updates will appear tonight including my personal 787’s (Yes – I have an armarda of them). Sorry!

Well Seattle. We have a little problem. What was going to be a glorious first flight has resulted in yet another delay for the 787 ZA001’s first flight.

So what’s happened this time?

In very basic terms, an issue with the centre wingbox and wingsbox seem to at the crux of the matter – requiring enforcement. At the moment, it could be considered safe to fly – but with no meaningful results so once again, the poor bird is sitting on the ground awaiting more work. 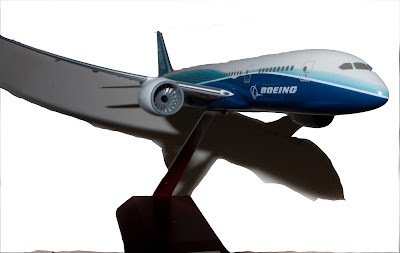 For the unitated… the wing box…. oh its where the wing joins the body. As in this badly PS’d picture.

Jon at FlightBlogger has a very nice techinical explanation:

The fallout from this could be pretty big.

Whilst the 787 will probably go on to be a great aircraft, it’s having a troublesome and difficult birth to the skies.