You are here: Home / News / UK Goverment gets a clue – All Change on the GWML!

Ok – a slight deviation from the norm – I’m going to talk about those things that go on wheels and snake across the country side and cities – Trains and Railways (I promise not to make a habit of this).

Something that has been on is the lack of continuing Electrification of the Railways in this country. Where Diesel powered trains are all well and good, the perceived environmental damage diesel does, the extra weight needed to lug the fuel and engine (and least of all if you’re downwind of a InterCity 125 its gas mask time).

Of course, there was also the small matter of privatisation of the railways in the 90’s that ground any major project to a halt – with companies investing in short term solutions as the franchise length is very very short.

So HM Government has actually got a good idea from the strategy boutique and have concerted on getting a major segment of the UK Railway System updated – the Great Western Main Line between London Paddington and Swansea, with infiles to Oxford, Bristol and Bath

There’s also a little inflill scheme between Manchester and Liverpool too.. 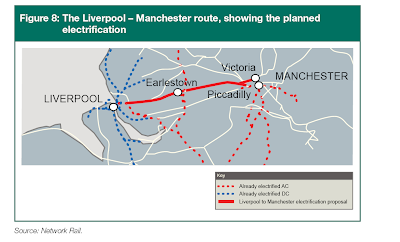 Well. It’s a start. The Government of the day tends to slide rail priorities down further than a fireman sliding down a pole – with air travel branded as a villain. If the UK is hell bent on meeting its “green” credentials, then there must be more schemes to increase our usage of rail, and increase electrification (for example, smaller infill projects to connect parts of the network electricity (eg, Wolverhampton to Shrewsbury, Birmingham to Nuneaton) to big electrification projects (Midland Main Line, HSL2).