You are here: Home / Uncategorized / Analysis: BA Citiflyer takes on the ERJ-170 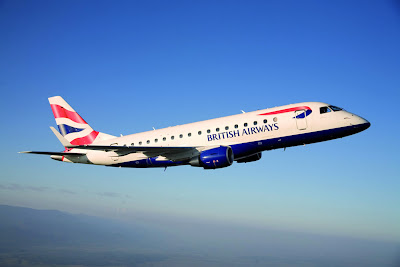 The ERJ-170/175/190/195 Project (E-Jets) to some people is simply an aircraft that’s been shrunk in the wash. More technically, it is a narrow body (single isle), Twin Engined (engines under the wing as opposed to being at the rear of the plane), short to medium range aircraft manufactured by Embraer of Brazil.

A new development for them, the class was launched in 2002, and has been gaining a lot of traction with both regional airlines and mainline airlines.

Inside – it’s a 2 x 2 arrangement or a 1 x 2 in First/Business depending on the company.

So, that’s the overview – what’s BA’s interest in the class?

BA CitiFlyer is running those lovely 4 engined Barbie jets with hairdryers for engines (Sometimes known as a BAe146/Avro 85/100) mainly for one reason – the Short TakOff and Landing  features of the aircraft – which is kind of essential for London City Airport from which they’ll be based at (due to the runway being 5000ft long).

And alas, the BAe 146’s are starting to age. So one has to replace them with more efficient aircraft.

Again, the ERJ-170 is cleared for SOTL and the Steep Approach needed for LCY – this makes a logical choice to switch over to this class of aircraft.

Whilst the green credentials should be noted, they will also be lower capacity than the BAe’s they’ll be replacing (76 seats vs 82 or 100), so fare might creep up slightly due to the competition for seat – however, there is going to be an introduction of the ERJ-190 shortly that will give a reasonable capacity boost.

The E-Jets isn’t exactly untried either – running successfully with LOT Polish Airlines, JetBlue in the USA, Republic Airlines for practically any airline that need regional service and FlyBe (the launch operator of the 195’s)

I can actually see BA working with these aircraft and winning with this class – least of all for the 2 x 2 seating, but for the relative comfort there is, and providing the configuration set up right, this should be a class to watch out for.

Whilst a smaller capacity than a Boeing 737-400, these aircraft do have the possibility to find other lines of work in by British operators, and I look forward to people taking advantage of what is simply a cute, efficient aircraft.  Another point to consider is that a ERJ-190/5 is what some would call “mainline size” – good for running thin routes, but making them cost effective.

Embraer posted a nice little video of what it’s like…

However, I hope they do take care of them – the first one has already had to head back to the factory due to a bird strike 🙁

With the A318’s and ERJ-170 heading for LCY… it’s going to spice up the competition there!