You are here: Home / Uncategorized / Air France… new seats… and bad news if you’re a POS*

In two steps, Air France seems to be trying to make money. First up is the introduction of silmline seats.

Slimline seats are the current modern marvel that reduces the weight of the seat, yet allows more passengers to be packed in a plane at the same time. Nifty. 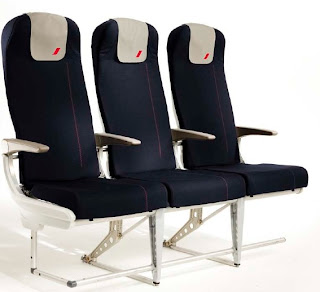 These seats are being introduced on the Short-Haul A319’s, A320’s and A321’s (37 frames in total) – in many respects – adding one row extra. Keep an eye out when selecting your seats

In perhaps not an unrelated news, Air France is now offering POS’s the option to buy a second seat at check-in at 75% of the fare (minus taxes and fees). If the flight is light, then you don’t have to pay for your extra seat.  Which is nice.

Alternatively – for safety reasons Air France can choose not to carry you. So if you’re 43″ waist or above,you don’t have to pay, but will be offered the extra seat actively.

“It is not an obligation; we suggest to such passengers they buy a second seat for their own comfort and in order to be sure the seats are adapted to their needs. If the plane is not full, they can get a refund.”

This new rule comes into effect from 1 February. Oh well Air France, win one loose one….