Yesterdays aerial and sea search for MH370 revealed nothing sadly, with no sightings of debris related to the aircraft… or otherwise.

However, the Malaysian government released a satellite image from France, showing around 122 items of debris, varying in size  – some were 1m in length, others as much as 23m in length, with some of the objects appearing bright – which could indicate solid materials floating around 2,550 kilometres south-west of Perth. 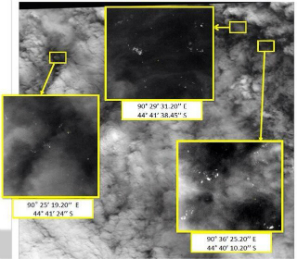 The image was taken on the 23rd March, and process by Malaysian Authorities. These debris images were picked up south of the current search area.

The search is continuing today, with 11 aircraft from the multinational forces of China, Australia, Japan and the United States of America, taking part with 6 military aircraft and 5 civilian aircraft taking part in the search today, along with five ships: Search so far and planned– AMSA Area of interest for the search today – AMSA

Time however is running out in two ways: Weather today is expected to deteriorate in the area as the day goes on – which could impact search operations.

In addition, the Black Box locator beacon is nearing the end of its battery life. Whilst the data on the Black Box should be pretty safe, it will be a lot harder to locate without that beacon. The weather again will be a major factor as winter draws further in the southern hemisphere of the world.

As time goes on, the families are still crying out for closure – maybe finding the remains of MH370 will help bring that closure.