Firstly, you might want to catch up with my initial thoughts of the Canon 100D, but in a sentence: It’s not the absolute perfect camera, but it’s a reasonably good travel camera.

How reasonable though? I’m going to continue with some long-term testing

The configuration of the camera for this long-term test:

Yes, I’m cheating slightly as I’m using my heavy-duty Wide zoom lens as well as a 50mm lens. A zoom gives me a touch more flexibility when on the road, as well as distributed weight on the camera – allowing for a better balance in the hand. In addition, the 17-40 makes a very nice “normal” lens on a camera that has a “crop factor” of 1.6 (making this a 27.2 – 64mm lens). The 50mm lens converts out into an 80mm equivalent lens – which requires taking a step back.

As a kit, this camera comes with an 18-55 f3.5-f5.6 lens in either a standard or Image Stabilized (IS) version. Go for the IS version if you’re considering it (just to make your life easier), or if you like a challenge and suffering budgetary constraints – save and get the standard version.

I got my camera as a “body only” option as I had lenses to play with already (and have been using it on and off for other purposes too).

The reason this test came about… well… Some person left his big Canon 6D in the hotel room rather than in his bag. The fact I reached more and more to the 100D during the trip should give you a hint of how I felt about the camera.

Some negative points first. Well. Negative point, and its to do with the battery. Chicago was what my friends in Minneapolis call warm. I called it bone chillingly cold.

As a result, the camera did once or twice (normally at the end of an afternoon/day out). On the plus side, it was capturing 400-500+ Camera RAW images a session… so I can’t moan….much (as cold batteries to shorter usable charges).

If anything this is the biggest issue you’ll have as the battery packs are TINY.

Those of you who are heavy shooters (or working the cold) may want to consider a couple of spares, and I’d recommend getting the proper Canon originals for once rather than the clone batteries, as I found the cheap clone batteries were running out of power quicker than the official Canon battery I had.

As usual, I’m shooting Camera RAW as it’s a format that allows me to do a lot more with the image afterwards. However, the buffer on the 100D is tiny – with the RAW image buffer filling up after x or so images at ISO100. Those in the rapid fire/multi-image shooting may want to scale up to the 60D/70D for a bigger buffer.

But in day-to-day tests, how did it fare? Not too bad is the answer.

Again I ran it through a series of tests based on the conditions that were there (snow, cold, sunlight, mixed, low light, etc). A full gallery is at the bottom Snow can be tough to catch nicely. The colour renditions are reasonable, with nice detail throughout. That and I didn’t slip on any of it, so that’s a bonus.

Lets look at the daytime shots, and see if they pass the mustard…. Across the Chicago River on North Michigan. Notice the flags – the camera has picked up those have seen better days Anish Kapoor’s stunning Cloud Gate sculpture in Millennium Park is a photographers dream and nightmare combined. But in these images, we see the range of the camera handling shadows and light rather nicely, with the blue skies nice and blue, and the people in the image captured nicely. Again, the camera is picking up the details – from the bumps on the warning strip the lights and shadows. 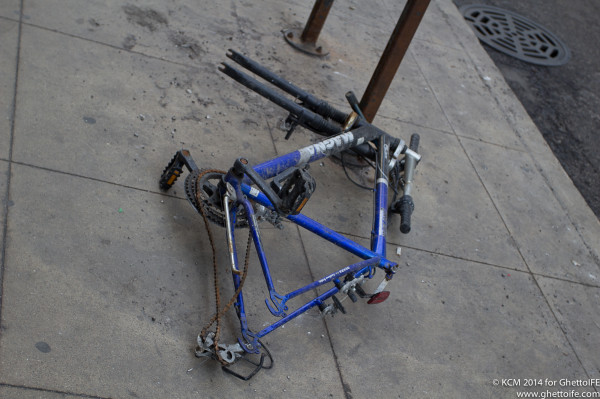 Even in shadowy areas, the detail is good – look at the bike chain as its rusting in place… Captured whist on the L. Whilst the windows were dirty, it seems to have done a reasonable job here. Fire trucks on the move are always troublesome to get. This one came out rather well I think… A bit of white out here in the top part of the image, but the core of the image itself is well toned.

Low light time. This is where the camera can struggle with camera noise (especially in black situations… but then, most cameras struggle anyway.  I’ve used a lot of ambient light, and the noise issue has been mostly negated. I love North American Alleys for some reason. The lighting and the passing L train adds to the scene here. State Street varies in its business. That night was busy, but it gave for an interesting overall scene. Focusing was off as it was more focused on the infinity, rather than the subject walking away though. The focusing was where I wanted it in this picture, with the bikes in the foreground in foucs, with the rest of the scene dissapering into a nice bokeh The bright lights of the street blubs help show off the passing train, along with the dusky blue sky here. The classic Chicago Theatre sign – lit up well, with a short exposure to capture the lights. Another tough picture to crack is this at O’Hare – with three trains in, on the escalator and it coming out sharp. You can see noise in the right hand train near the light, but it’s as best as I’ll ever get from there.

The bottom line: After some initial misgivings of this camera (and there are some issues with it, least of all the battery packs and the buffer size), I’ve warmed to it as my choice of travel camera.

But that doesn’t mean I won’t have the Canon 6D in the bag.

Chase Jarvis wrote and published a very good book called “The best camera is the one you have with you“.

And to a point, I agree. However, I am of the secondary opinion of “Giving yourself the tools for the best possible image”… and if that means carrying a second camera in the bag… so be it.

But I’m finding I’m reaching for the Canon 100D more and more. Which is no bad thing.