You are here: Home / Travel Plus / ... Long Term Review / Travel Plus… Technology/Photography: Canon 100D – Hiking the down the Diamond Head

Time to return to a long-term test – my Canon 100D Digital SLR camera that I tend to throw in the bag when I’m travelling. For those of you who are interested in some background on the long-term test, have a look at it in San Francisco and Chicago. My interest in the 100D is simple – is it any good as a travel camera? Most of you know that I rate it as a lightweight body that’s good to throw of the shoulder

I decided the battle-ground for this continued test would be a the Diamond Head State monument on O’ahu, Hawaii.

So, with an L Series lens strapped to the front of a tiddly little camera? How does it perform?

At the top of the Diamond Head Trail The 100D with the 24-105 adds a nice dimension to the images, with the 1.6x crop factor adding a bit more “zoom” than the 6D. However, there are no compliants at all here. Zoomed in a bit, the 100D continues to pick up detail nicely On this descent picture, the image is nice and clear, with some nice colours popping out. Looking into the Diamond Head bowl, again a nice selection of colours in this panoramic scene. The details of the lookout and the rock are well defined here, and the image seems to be shake free – always a good thing. People descending the peak of the Diamond Head. Note the clear blues and the detail in the grass. Again, it’s iInteresting to see the development and the natural park. You’ll notice there is distinct fuzz in the left of the picture. This is a point where the camera isn’t set up right, and I should had used Shutter Priority instead of Aperture priority… or Program Mode. A bit of fuzz in this as I was moving. I should stop more often. The tunnel provided an interesting challenge. Whilst not much detail here, the lit parts offer how high the tunnel is, and the light provides a nice keypoint. Bokeh? We can do bokeh! Not bad at all, with nice out of focus areas. Those paths were not smooth! Some interesting details in the path. 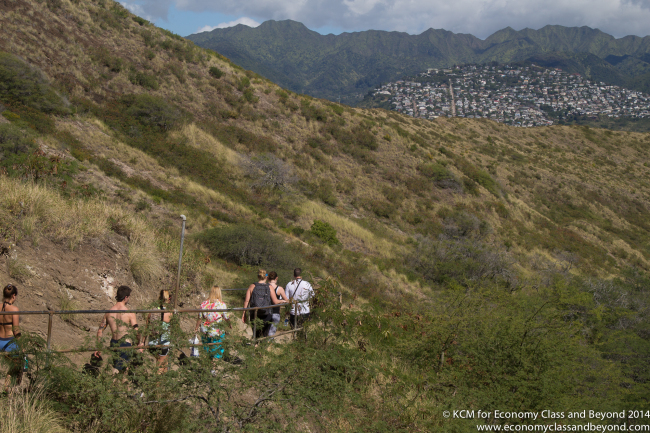 Going up maybe fun. But going down is more fun. Concrete is highly underrated. My legs and muscles agreed with this statement. Whilst not shot on the 100D or 6D, it’s not a bad view when laying down and relaxing.

Overall: The 100D continues to shine. It’s a great little camera – if not the fastest in the world. Its weight is a distinct advantage on hikes like the Diamond Head where paying attention to where you’re going is more important than getting the perfect picture. Whilst some will prefer carrying bigger bodies around – remember you have to carry the heavy camera gear up a place, as well as down…