In this snapshot, I take a look at British Airways 296 Chicago to London run. Have things improved or got worse down the back of the plane? Lets have a quick look before the main trip report…

Boarding: Boarding was direct from the First Class Lounge and into the jetway. A rather nice way to board. Shame the boarding pass didn’t beep with an upgrade (however much I tried to buy one before boarding)…

Equipment: Originally booked a Boeing 777-300ER. Sadly, the equipment gods came into play and swapped it… for a refurbished Boeing 777-200ER (with GE90 engines). On the plus side, the seats are the new BA long haul seats. Sadly, on the minus side – it’s all slimline seating. We all know what that means – sore backsides after a few hours in the air. World Traveller – my seat in the exit row 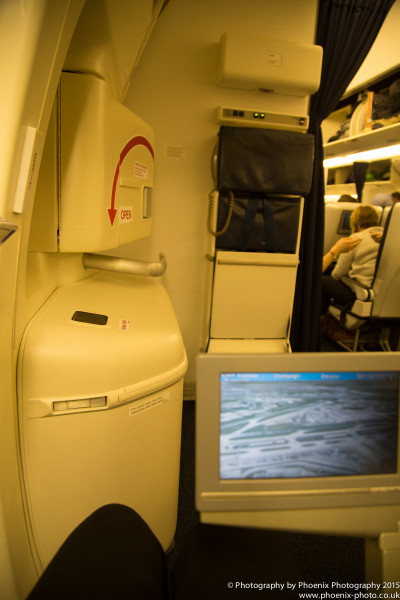 A fair to middling load that night. The view into the forbidden zone (World Traveller Plus)

IFE – In flight Entertainment on these planes is the upgraded Thales i5000 series – meaning the IFE system has more than enough content on it. And more importantly, content that was actually watchable as opposed to the stuff loaded aboard the Iberia flight. Again, a touch screen interface and simple – if sluggish – to use. USB And headphones socket. Not bad connectivity there. There’s even 110volt power somewhere.

Catering: Hmm. Let’s say the crew weren’t generous with the drinks on this flight A single cola and vodka. I’m glad I brought a bottle of water in the terminal…

The food wasn’t that bad though. For some reason, I ended up with the same meal I had on my last BA flight from Chicago – Cottage Pie. Either they’ve got a very good deal on Cottage Pie, or there’s a load of them stored in the freezer at O’Hare. I don’t want to hazard a guess which is the truth… Is the best you can do on a long-haul flight British Airways? Really? Although quite frankly, I can’t name a single airline that offers anything remotely substantial in economy class for a breakfast service when heading from North America to the United Kingdom.

Landing was good, with no stacking and a simple approach over London with an early arrival too. Even the cabin crew member sitting opposite me thought we were doing well until we turned for the hard stands.

So we arrive at the UK’s premier passenger terminal… on buses again. Because we all love the smell of Jet1A in the morning.

The full review sometime next month!