With a friendly good evening, I was welcomed aboard this 777-200ER… and I noticed something straight away about it – it didn’t feel right in the least compared to some of British Airways other birds I’ve ended up on.

Wandering past World Traveller Plus, I saw that the improved products had been installed on this plane – this would mean that with updated IFE and the new seating, this would be one of the 777-200ERs that were fitted with the GE90 engines.

We’ll get onto the engines in a moment.

World Traveller Plus… not for me that night. My row in World Traveller Now, I’ve been aboard my fair share of BA planes… but these engines where whiny in the odd sort of way. I know there’s no right way for an engine to sound, but these… were whiny turbofans that we had aboard whilst on the ground.

Or maybe I’m conditioned to like the sound of Rolls Royce Engines now. Boarding continued apace as a 777-300ER’s load of passengers filled up this smaller 777-200ER. Whilst boarding was in progress, I took my opportunity to explore the IFE system.

The IFE aboard the plane is the Thales i5000 system – and it’s a reasonable enough system, if a tiny bit sluggish to use. 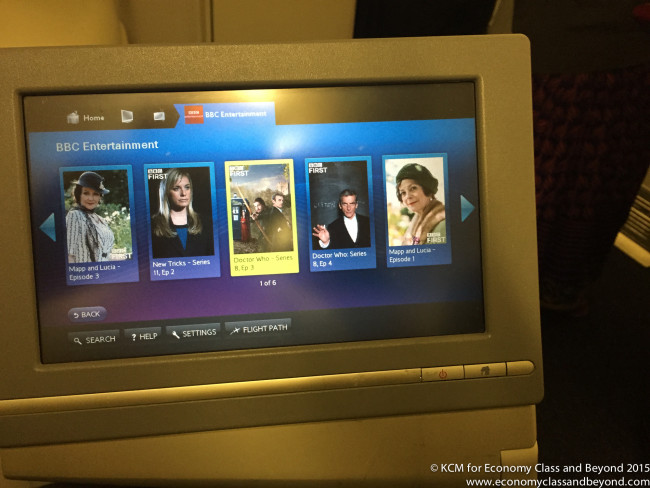 Because after watching Cartoon Network and CNN for days on end, I need some news in the English language and accent. Good thing BBC News is loaded on these planes.

The map software is pleasant enough to use, although the GPS was more than a little off. Combining local imagery with the map really works in this setting. We were parked at the gate when this was shot. Seems the GPS is more than a little off. Remote control with QWERTY keyboard on the back.

Soon enough it was time for the safety video for play as our plane pushed back on time for the 7 hours or so to Heathrow.

Being sat where I was sadly – the exit row – you don’t get a window. A bit of a shame, but not the end of the world on a night flight. Almost ready to go – with photos like these, getting pictures of pretty planes wasn’t going to happen.

With our taxi underway, we made a reasonably quick taxi around O’Hare. Soon enough, the GE-90s spooled up to create a racket and our plane took to the sky. The classic overhead panel. Shame about the lack of air vents.

A full bar service was the first order of business, and my usual inflight tipple was the order of the day. Although I do think budget cuts are showing at BA…

Table half deployed… well it’s for drinks – you don’t need a full table. 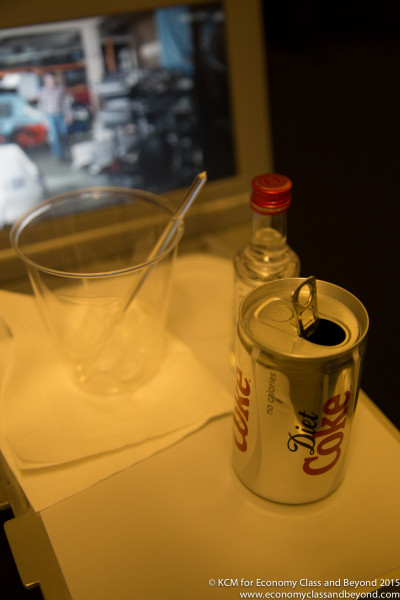 Wait. A tiddly can of Diet coke and one Vodka bottle? Oh well.

With that drink nicely on the way, it was time to experience the delights of Chicago catering – which tonight had pasta or Cottage Pie on the menu.

Wait. Cottage pie. Again? Have the caterers at O’Hare got nothing better to offer, is it one of the few things they plenty of in bulk… or (more likely), have I caught the same rotation in meals? The Vino. It tasted like an approximation to wine. Even in Economy Class they do Bread on a Plate. With Butter. The meal itself was filling, with the main part of it well portioned for an inflight meal, and the cottage pie being rather passable to be honest. It’s still better catering that what American offers on the same route.

With the tray cleared down, and the water bottle kept, I closed my eyes, stretched my legs out – and collapsed for the next few hours as the plane crossed the Atlantic.

Before I did – I did request an eye mask and socks… sadly, these didn’t turn up.

To be honest, I got a fair amount of rest down the back of the plane, only to be woken as the lights came on for the breakfast service to commence.

I almost wished I stayed asleep when I saw what the service was. Really. A croissant and a coffee.

Breakfast has always been a week second service across the pond. This meal is no different to be honest with a pretty awful croissant.

I do wish carriers would make a bit more of an effort for the second service. Some fresh fruit wouldn’t go amiss…

As the lights were up, people where also waking up and lifting window. I had a peak outside to see how the morning was progressing.. No non premium passengers beyond this point! Yup. It’ either Ireland or England. It’s land though.

With the cabin tided and cleaned up, it was time for the plane to commence its decent into Heathrow.

All is good aboard the good ship G-VIIE Cabin in the ready position for landing.

Landing as far as I could tell was over London and down (probably at 27R landing) – mainly as the taxi was very short to the gate. The cabin attendant and me got chatting during landing, expressing the lack of stacking and the ease we got into Heathrow. I responded with “We’ll get a bus gate”.

I hate being right.

The plane taxied towards T5C, and then turned for the bus gate – with the front office announcing so.

We eventually parked at our hard stand, and the bongs went off – ending the flight – and the mass rush to get off the plane.

Thankfully ground services were ready for us, and buses were waiting. I thanked the crew, and headed for the bus. Overall: The British Airways experience across the pond is fair to middling. Dependant on the crew, you can get some great service. However, that was missing on this flight (from things of lack of a Cabin Service Director greeting to a request for socks and an eye mask).

Definitely a case of “can do better” here.

NEXT: The British Airways Arrival Lounge and Homeward Bound.