Swiss will have a fleet of seven Boeing 777-300ERs (with an additional three to follow), which they will deploy to Asia, South America and the west coast of the USA as they replace older Airbus A340s. Plans call for 340 seater planes in a three-class configuration , with a first class seat can be used for two people to dine at once with, as well as being convertible into a private suite in a 1-2-1 formation: Meanwhile Business Class gets more Thomson Vantage seats in some odd configurations. A lot of seats seem to be direct aisle access, whilst there is one seat with two seats in it (look at the image below carefully. The seat is a flat seat convertible bed. Finally, we come to Economy Class, and as feared, Swiss have deployed 3-4-3 seating down the back of the plane. These seats will feature a large touchscreen. 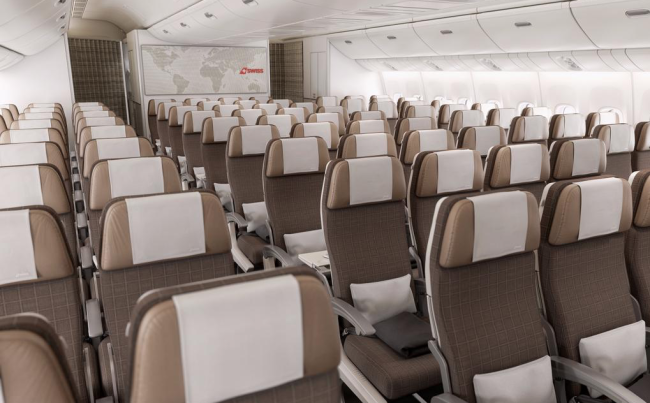 In addition, Swiss Economy Passengers will have access to a self-service kiosk too to grab snacks and drinks. WiFi will be provisioned in all classes for those who need it as well. No prices has been announced or confirmed for it.

These aircraft will begin flying in Summer 2016.

Swiss also released a video to go with this:

Whilst up front, it’s all bells and whistles, its sad to see another airline deploy the crush seating layouts of 3-4-3 to get a few extra pennies.

Still, for those who are redeeming miles or looking to spend cash on a decent product – this isn’t a bad option for the future. Economy Class passengers may choose to look elsewhere for less cramp environments.