You are here: Home / Uncategorized / Ghetto IFE on… the Apple iPad 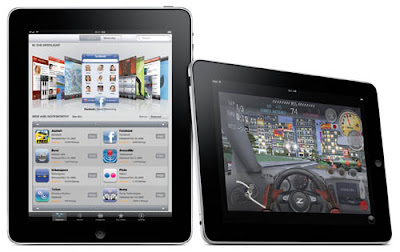 For Ghetto IFE users, what’s the interest in this device?

Take you standard iPod Touch. Now pimp the screen. There you go. All the usual tools (including Safari, Mail, Photos, etc etc are there).

In terms of entertainment, there is a nice large screen for music and video, with an alleged 10 hour runtime of VIDEO. In other words, LHR-BKK, LHR-SIN, LHR-SFO, SFO-TYO etc range is the name of the game.

In travel terms, it should fit in your bag nicely – least of all it’s only 1/2″ thin, 1.5lb/685gramms heavy, with 16GB storage to start with, up to 64GB (non expandable), and it’ll load all your Application you’ve got from the App Store.

One of the new features is it’s also going to be an Ebook Reader. This I’ve got a few concerns about (you try staring at a bright backlit screen for hours – doesn’t do your eyes any good). An eInk based reader might be a better option.

For those who are going try to use this for business (and good luck getting on your accounts), iWork will also make an appearance too.

For a device like this, WiFi and 3G (The WCDMA2100 standard – not EDVO or WCDMA1700) will make an appearance too. It’s SIM unlocked, so it should be able to be used in any country you like with whatever data plan.

I’m sorry, I would had expected a bit more – but I thought overblown iPod touch would be the order of the day… and I’m not off the mark.

It’s pricing is about cheap netbook level, and a bit beyond that if you add 3G Radio. As it’s pre-pay, I don’t expect operators to subsidise this at all as a lot of operators still have to get over charging silly amounts per megabyte still.

The lack of multi-tasking is quite frankly getting to the point of unacceptability, and is a point to address in the next iPhone software – and the unwillingness of Apple to open up the platform to Java and Flash is getting downright annoying.