Farewell Miles – A Mileage Burning Party with All Nippon Airlines, Thai Airways and Asiana Airlines in Business Class (with a BMI Leg)

Hello and welcome to another GhettoIFE.com trip report. And yes, it seems I’m knocking them out more than is good for me, but hey – I like writing in my spare time. Well writing is such a loose term. More like ramblings.

Now most of regular readers may fall into shock when the following words are uttered. Yes it’s a BUSINESS CLASS TRIP. Well – just one leg in Economy, but that’s in Europe and that doesn’t count 😉

Will there be a GhettoIFE system though? That’s something you’ll have to find out… and not in the traditional way 😉

There is a slight difference to this report due to the sheer size of content to it, and that is I’m going to be publishing it bit by bit. That and I can actually finish it without wanting to pull my hair out.

BMI has been an odd little airline, right from its start as Derby Air Schools, manifesting it’s way along to British Midland Airways, to the days of Diamond Service, and then to the days being owned by SAS, Lufthansa and a British Sir, to the forced sale to Lufthansa by a British Sir, to now the final days before it’s sold lock stock to British Airways (unless Virgin Atlantic gets it way – which I highly doubt).

And before it’s sold off and becomes a footnote in British Aviation history, I’ve decided to use some of the mileage pile I had to have “one of those journeys”.

Most of my regular readers will know of my “love” (and that’s a wrong word, believe me) of Economy Class with iPhones in sick bags.  Well for once, that goes in the bin and I become a privileged traveller, and fly business class. Yes, regular readers of my previous reports that going anywhere near forward of the engines for me is a rare occurrence.  I’ve done a First Class Trip before, and a couple of Business class trips too, but going near the front of the plane should send most of you into shock 😉

Tradition (what traditions I have) state for best value “Go East” because. And I’m following that advice in my head. But this quickly turns into a game of Mornington Crescent rather quickly (with Mornington Crescent being Hong Kong Chek Lap Kok International Airport. And I’ll be using the Kevincm set of rules where shunts are blind, Canon Street is closed, Birmingham New Street is a no smoking zone and a move Victoria Coach station will end in knipp. Without a chance of getting out of it).

And there’s a variety of ways to slice it for a Star Alliance traveller! 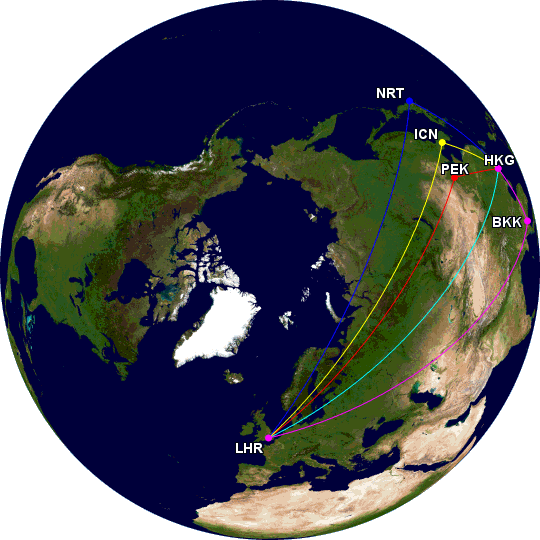 Of course, which way you can go is dependant on the BMI Call Centre. And we know the BMI call centre is a law unto itself. Therefore knowing where to go before hand is always helpful.

Looking at routes, I like to be semi tax efficient. That’s posh speak for NOT paying the Right Honourable Chancellor of the Exchequer (George Osborn – I have other names for him, but this is a family web site) a pile of tax just because he feels like it commonly knowing as Air Passenger Duty. The fact that on a redemption like this in a premium cabin it’s a whopping £180  just to get on an aircraft requires an extra bit of thought and planning.

So I normally at this point resort to my usual plan of stop over in Germany, where the tax is a slightly more palatable €55.  I’d prefer it to be £0, but hey – work with what you can get I say. Whilst Copenhagen or Porto was on the cards as as starting point  to save a bit of tax, the costs would had outweighed the cost of positioning.

Some of you may be aware that I can be a self confessed plane geek (when I choose to be mind) and although I don’t go out of my way to take a route because of a plane, I wouldn’t say no if the opportunity arises. And ANA presented that opportunity with its brand new Boeing 787.  Whilst this runs Frankfurt – Toyko Haneda, it’s timings are different as this service arrives in the morning, so leaves just before lunchtime in Germany.

I spent a few hours with the ANA tool and Continental booking tools to identify space and found what seemed to be the perfect dates. I wanted to give ANA time to get used to the 787 in service, but I also wanted to try the darn thing out… just because.

Therefore I gave it a month after the commencement of service, and a tag on from Haneda to Hong Kong (so Tokyo would be the heart of the trip, Hong Kong would be the tag on).

A call to the BMI Call centre, and the legs were booked without a problem. Scary. Apart from the near enough £300 YQ and Tax charge – that was equally scary.

Getting back to the UK, I wanted again to be cash efficient after that expensive exercise, which means routing back via Seoul as Asiana has extremely low fuel surcharges. And if I’m blunt I do like a bit of Seoul (yes that’s a bad pun, even by my standards).  Going via Bangkok would had been £240 for the privilege, going through Seoul is about £95. But getting seats on the night Asiana flight was… impossible. The Thai flight came up as an option ,but would require an overnight option to connect to the daytime Asiana London flight. I grumbled and accepted this.

And as I thought about it for a week, I thought – you know what – stuff it.  Another call to the BMI Call centre, and it was converted into a two day stopover for an extra £9 + £25 change fee.

With the flights set, I tuned my attention to the task of hotels. And as I was planning this, Intercontinental Hotel Group decided to re-price and revalue the rates of redemption’s for some of their properties. I took this as a hint, and after a bit of research booked on Points and Cash The Strings (Intercontinental) in Tokyo as it would be close to Haneda when the time came to travel onto the next destination. Additionally, it was right on the Yamanote line which for me – represented the best access points to Tokyo. For Hong Kong, I’d switch positions from last time and stay on the island as opposed to Kowloon, and stay in the Crown Plaza Causeway Bay near the Happy Valley Race course.

For the hotel in Seoul, I hoped that Accor would have a sale. They didn’t sadly. Therefore it was the olde fall-back onto Hotels.com using Quidco, to organise a room. The Ramada Dongdamun turned up at a reasonable £60 a night. This is near the fashion market, and on Line 2,4 and 5 on the Seoul Metro – very nicely connected and convenient compared to say the Intercontinentals on the other side of the river near the COEX . Meanwhile, for accommodation in Frankfurt, Accor actually had a sale on and that would be with one of their MGallery Collection Properties – the Hotel Savigny near Frankfurt Hbf.

Of course, I need to get to Frankfurt to commence this trip. So yes, I’m bagging the local service from Birmingham to Frankfurt. Which is operated for Lufthansa by… BMI. Irony? Somewhat 😉

Seat assignments were easy enough for Asiana and Thai Airways using the LOT Manage My Booking Booking, however trying to assign a seat with ANA was near enough impossible – put it like this: I had to assign my seat at Online Check in (although I did get a window seat – more on that later)

So here’s the final route map:

Anyway, enough of the gibber jabber, lets get rolling!

If you represent an organisation who has been reviewed in a Trip Report and wish for clarification over any issue , please contact me directly at blog@ghettoife.com stating your credentials and the nature of  the question requiring clarification. A response will be sent to you as soon as is possible.