There has been a fire at London Heathrow Airport today which has required the airport to close for a while according to  http://www.bbc.co.uk/news/uk-23294760. 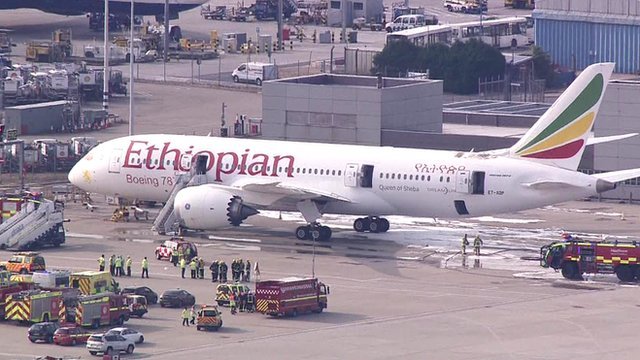 The airport was closed between 16:30BST and 18:00BST. Arrivals and departures were suspended, but the airport has reopened with delays stacking up.

The plane was on the ground parked.  No passengers were reported to be aboard during the fire

The plane involved is an Ethiopian Airlines plane – registered as  ET-AOP – A Boeing 787 Dreamliner. This was the first Dreamliner to re-enter service after the worldwide grounding of the 787 fleet.

According to the London Metropolitan police

Cause of fire on a plane at Heathrow is unexplained and under investigation. No reports of injuries at this time.

The fire has damaged the top of the plane, forward of the tail according to this picture at https://twitter.com/raisinganchor/status/355729741552185344/photo/1. According to the airport the fire was an internal fire aboard the aircraft.

Flightradar has reported that Heathrow has reopened according to http://fr24.com/DLH3UT and Heathrow airport confirmed this, with delays expected.

Both the US National Transportation Safety Board and the UK Air Accident Investigation Branch are sending teams to investigate.