You are here: Home / Trips / Chicago and Hamburg / Two for the Price of One: Heathrow Transit, American Airlines Flagship Lounge

Two for the Price of One: Heathrow Transit, American Airlines Flagship Lounge

Once off the plane, it was a matter of following all the signs to the transit location, and clearing Terminal 3 security (as well as AA Passport and document check).

In the bright confines of Terminal 5. Arriving into Terminal 5 at a gate, I headed for the transfer zone. As the plane was docked at Gate 1, it was a hike through T5 transfers/arrival level, after clearing a boarding pass inspection. Those formalities completed, I headed to the shuttle bus to Terminal 3. Thankfully, with short waits between shuttle buses, a bus was waiting for me when I arrived at the lower transfer area. An Arriving Iberia Airbus A321

And with that, it was a short drive from Terminal 5 to the Central Terminal Area (or Terminal 3).

Editors note: No, the camera wasn’t on the blink – rather I was shooting through purple. Adds a nice touch. Or not. Non fans of the colour purple need not apply. Heathrow’s Tower of Power… In Purple! 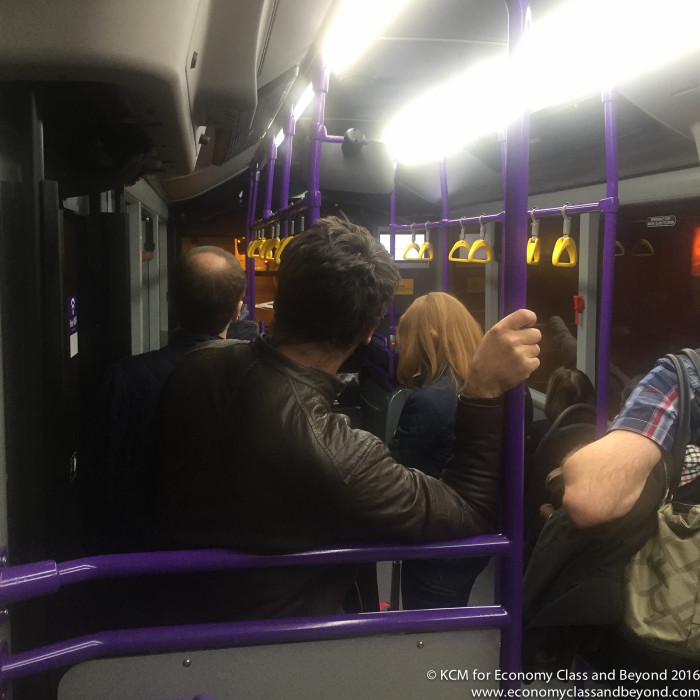 And a Virgin Atlantic Airbus A340-600… with a purple moodlit touch.

Arriving in Terminal 3, it as a matter of following the signs… and going up, then down, clearing security, and then clearing the Advanced Passenger information section. Terminal 3 – more a building site than it used to be. Everyone and everything is on a journey these days. Even Heathrow Airport.

Whilst it didn’t add much time for me as I went in the premium queue, there was a substantial queue for those without any status. API Clearance Section for American Airlines. British Airways and Virgin has a small section outside this for their passengers to clear at.

That done, I headed into the maelstrom that is the Oceanic Terminal – Terminal 3. Heathrow Airport – a mall with jetbridges. Before heading to a lounge – I wanted to get a few things (namely, a bottle of water and to laugh at the Duty Free prices of certain things).

And laugh I did when the high street was beating Dixons Travel hands down on pricing of lenses. But that’s a different post completely. Suffice to say, I didn’t buy a lens and it pays to shop before you travel.

Even when it comes to electronics, there are savings to be had… even when Dixons Travel says they aren’t (and even with the minor pressure I was exerting, I wasn’t going to get Dixons to pay out on its double the difference guarantee… so that’s a waste of time, space an energy).

With the shopping done, it off to the American Airlines lounge. I could had gone to the British Airways lounge… but there was no real point to go lounge hopping With the shopping done, it off to the American Airlines lounge. I was welcomed to the lounge, and directed to the Flagship lounge.

Yes, this is the final milking of my oneworld emerald status was about to begin… and I might as well milk the darn thing since I’m heading into the slightly darker lands of Sapphire (or BA Silver).

The Flagship lounge is one of the quieter loungers at Terminal 3 – always good for a snack – so I parked my stuff down, and settled into breakfast. I’m still not sure about those scrambled eggs…

The lounge Wifi was pretty speedy allowing me to get on with a few things (as well as practice working with the little Lenovo that would be my friend for when I was in Hamburg).

Checking the boarding times, I took a look at the board – and found my flight was delayed. This was annoying – as I did have a pretty hectic schedule lined up in Chicago.

At same time, I asked for a seat map check – and found that the seat next to me would be clear for the journey to Chicago. The agent offered to block the spare seat for me – a very kind gesture.

Meanwhile, the food changed from breakfast to lunch. Time ticked on, and after the laptop was charged, and I was prepared for the flight – the flight was called near enough an hour late. Time to head to the gate. I finally reached Gate 28, where I was cleared and blipped in. With the plane outside looking happy to itself, I noticed the crew coming through. Yep – further delays along the line this day. Eventually, boarding was called for first, business and priority passengers… with everyone trying to board at once. A bit of ordered chaos to say the least.