You are here: Home / Trips / Donughts / Doughnuts On The Mound – Aer Lingus EI263 Birmingham to Dublin

Doughnuts On The Mound – Aer Lingus EI263 Birmingham to Dublin

Heading out on the stand, our Airbus A320 was waiting for us. With my seat allocate to the back of the plane, I headed for the rear air-stairs. No… not the front… Back to the back.

I was welcomed aboard, and headed the few rows from the back of the plane to my seat. So let’s look at the seat – well, it’s the slimline blue leather seat that Aer Lingus loves to use. It isn’t that bad, with reasonable legroom. Not the greatest seat, but for this 1 hour hop – it will do. Whilst a lot of passengers had queued up, most of the were boarding from the front of the plane (rather than using the back), so boarding took a little time.

Eventually, boarding was declared complete, with the middle seat free on the plane.

I could handle that. With boarding complete, our plane pushed back and begun taxing around Birmingham Airport, following a Qatar Airways Boeing 787 Dreamliner as it taxied out. The back of a little Helvetic Fokker flying for Swiss loading – looks like they couldn’t be bothered to pay for a jetbridge either. Emirates Boeing 777-300ER – soon to be a thing of the past at Birmingham Airport when the airline moves to A380 operations exclusively. Qatar Airways 787 heading off on its own adventure back to Doha… via the far end of the runway.

With the Qatar Airways Boeing 787 going to the far end of the runway, our A320 turned to the shorter runway, and EI263 powered away.

With our A320 airborne and climbing, it was time to settle down and watch the sky. Well, there’s no IFE system on the short-haul Aer Lingus fleet, so your IFE is a choice of the window or the seat in front of you. Although the person in front of me decided to create his own entertainment – by reclining his seat. Yes – for a 1 hour flight or so, someone decided they would be the one to recline their seat.

I honestly have no words.

Meanwhile, the cabin crew were doing a roaring trade, with all four crew working two trolleys up and down the aisle on the buy-on-board service, with nearly someone at every row stopping the trolley to pick something up. With the passenger next to me asleep and me at the window, I just glued my face to the window to watch the sky unfold. No WiFi for you on short-haul services!

As such, it was back to the exterior IFE. Why? I needed another model aircraft (Although if I realised it was a Premier Planes model, I would had skipped it in the end… I prefer Skymarks, Hogan Wings or if I’m feeling flush – Gemini Jets).

With the shopping service concluded, the crew were rushing around to secure the cabin for landing. Our A320 vectored in, and found an approach it liked – and begun to descend in the Dublin area. I think we just might beat the ferries to their destinations

With the landing gears being deployed and Dublin to the left – it was time to head for landing. Dun Laoghaire in the distance. 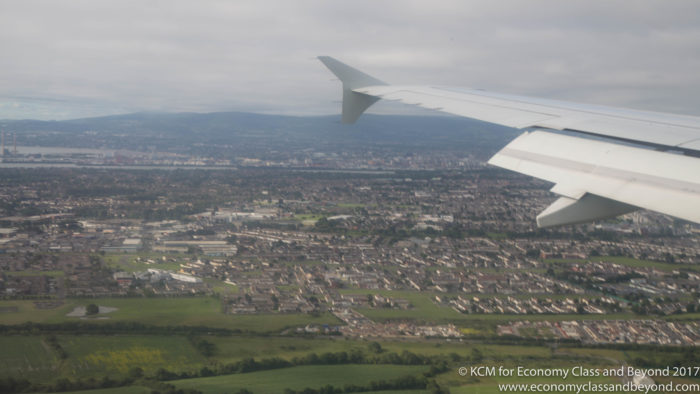 EI263 landed with a satisfying thump, and then the usual exit on the Echos, and a long taxi back to the terminal area

Our plane manoeuvred around Dublin Airport, with our plane turning away from Terminal 2, and instead heading for Terminal 1.

It seems my cunning plan of de-planing from the back of the plane was going splat fast. Instead, our plane was docking at the 300 gates – or the old International satellite at Dublin Airport. Turning for 316 past the old International Pier. Emirate A330 parked next to us.

Our plane made it to Gate 316 and powered down.

Then begun the mass bundle off the plane. I waited until my row cleared, and headed off for a day of spotting planes. C’mon people. There are planes to watch.

Overall: We’re back to friendly crews aboard EI263 and ones that want to give a great service on Aer Lingus – and that’s a darn good sight to see. It means the crew are motivated, and they’re happy. And a happy crew leads to a happy flight normally. The extra space was welcome too.

Next: Doughnuts on the Mound!