Once again, Adam is back looking at lounges for me whilst I’m trapped in the office. This time, he’s at Terminal 3 in Manchester Airport, and at The Escape Lounge. I’ve been to the British Airways T3 lounge a few times before. How does The Escape Lounge compare to the BA offering next door?

Over to you Adam…

Manchester Airport Terminal 3 is a severely overstretched bit of airport. Manchester Airport T3 in the morning.

Originally designed to serve as a hub for British Airways’ regional operations, the terminal now plays host to a somewhat random assortment of short haul and long haul, full service (as much as that term has any meaning these days) and low cost carriers.

Unfortunately for its regular users, such as yours truly, the breakneck expansion of one of those airlines (Ryanair) means that the terminal is now an incredibly busy place and there simply isn’t enough space for the passenger throughput it handles on a daily basis. 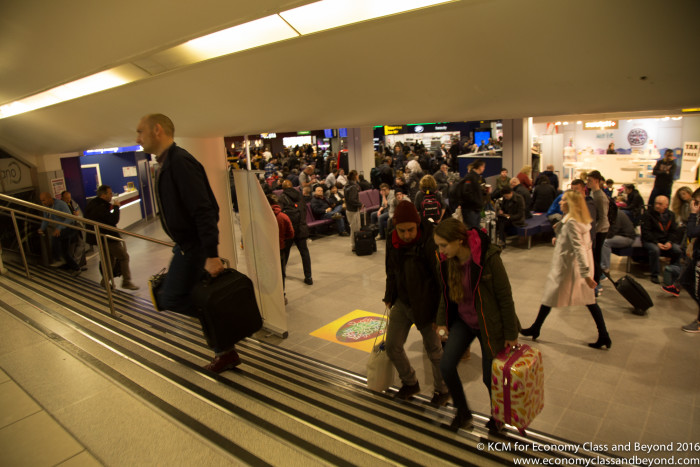 Busy at 6am in the morning…

The central waiting area, which may well have been an oasis of calm back in the BA regional days is now an overcrowded, overpriced and generally unpleasant bar, which is typical of most of the terminal’s facilities. Overlooking it however are two potential escape from all this. The British Airways lounge and the airport operated Escape Lounge. Kevin has reviewed the former of these before so I thought I’d take a look at the latter when I passed through MAN T3 twice in the last week.

The lounge occupies the upper level of Manchester Terminal 3, offering a great view of the planes and the terminal below. The Escape Lounge – Image Adam (Note the BA lounge on the other side of the wall) – Image, Adam Originally, the entire upper level was occupied by the British Airways lounge. Network cutbacks mean that the airline simply doesn’t require the amount of space that it once did and consequently the space was divided in half about 7 years ago. The non-BA half was originally a Flybe lounge before the airline abandoned its self operated lounges, at which point the airport stepped in.

This means that the entrance to the lounge is somewhat hidden away at the end of the long corridor.

To your right after entering is the food buffet. This generally offers one or two hot options. In the morning this means bacon and sausage rolls (in proper rolls, not those weird hard things that BA Galleries Heathrow inexplicably favours) alongside a selection of cereals, pastries, fruit and yoghurt. The food is generally tasty and fairly good quality although it does tend to run out fairly quickly and the staff can take a while to replace it. Further along the wall is a manned bar offering a full selection of beers wines and spirits (champagne is chargeable but everything else is free). As your author was travelling on business during this review he would like the record to show that he did not indulge at the bar. Continuing along the wall, you come to an excellent coffee machine offering a full selection of normal and decaf coffees and hot chocolate (although who in their right mind wants decaf at 5am I don’t know…). Back in the centre of the lounge is a full selection of newspapers including The Guardian, which I’ve never seen in an airport lounge before. You’ll also find the usual selection of posh magazines that no-one in their right mind would ever pay actual money for. There’s a quieter ‘adults only’ area with comfy seats overlooking the terminal and a number of working desks designed for one against the far wall. The WiFi is incredibly poor, my speed test showed a top speed of under 1mbps which is poor, even by UK public WiFi standards.

The atmosphere of the lounge can vary depending on the time of day. During this visit it was relatively peaceful. However, on Fridays and at weekends it can attract a hen and stag crowd, although the staff are fairly good at managing this.

In terms of access options, the lounge accepts Priority Pass and Lounge Club, which means Amex Gold and Platinum cardholders are fine.

Access is £30 on the door, which is a tad steep, or £19 if booked in advance online, which is excellent value. Given the overcrowded mess that is Terminal 3, I’d highly recommend booking the lounge if you’ll be spending more than an hour air-side the next time you visit Manchester Airport.

Have you strayed from the Galleries Lounge to the The Escape Lounge lounge at Manchester Airport? What do you think of it as an option to the British Airways options? Comments welcome in the box below!

Thanks to Adam who reviewed this lounge for Economy Class and Beyond. Lunch is on me in Lisbon.