For those of you flight-simulator lovers who have been waiting for Microsoft Flight Simulator 2020, there’s good news – the release date of 18th of August has been set.

Of course – Microsoft isn’t making things easy for you. Not by a long shot… 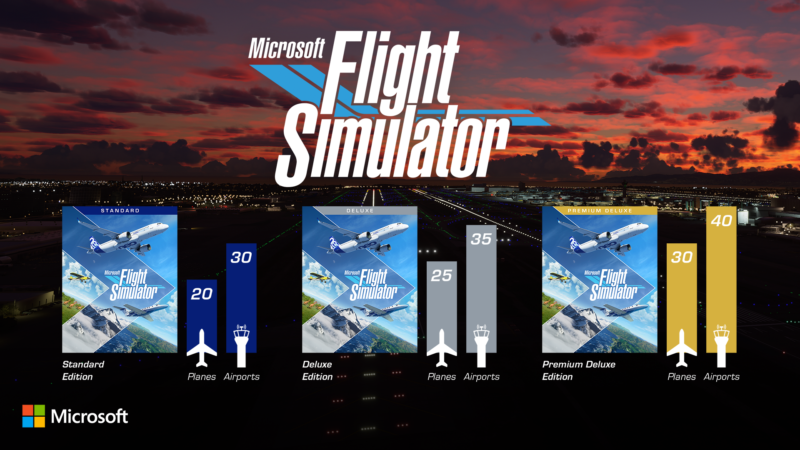 So what are the differences? It boils down to Aircraft and Airports.

Let’s look at Aircraft. If you want to fly a Boeing 787-10 Dreamliner, you’re going to have to pay for the Premium package (along with a lot number of other aircraft) As standard, you will get:

And the Premium Edition adds on top:

Want to fly London Heathrow to Chicago O’Hare? Prepare to pay for the premium edition…

In the Standard Edition of Flight Simulator 2020, there’s many popular airports and airstrips including: In the Deluxe Edition, you also get

And there’s the premium edition, which will get you

Eurogamer reached out to Microsoft – as there are 3700 airports in Flight Simulator 2020. It turns out these are “hand-crafted experiences“. What the actual differences are have yet to be revealed.

It depends if you want to pay for these experiences…

Don’t forget to ensure that your computer can power it too.

You’re going to need a reasonably competent PC – and your laptop with an integrated graphics unit may not be enough.

The minimum specification for Flight Simulator 2020 is

If you’re looking for performance, be prepared to dig and upgrade you rig as needed – Modern Intel 9th/10th Generation processes or AMD 3000 Ryzen chips will help with the processing grunt, whist an Nvidia GTX 10xx series or RTX 20xx series family GPU will help. Radeon RX580 or 1600 series graphics may be a good idea too.

Those of you with laptops and pre-assembled computers – be extra careful. A lot of laptops (and some desktops) have integrated graphics (Intel IRIS graphics or AMD Radeon APU’s). As such, budget an upgrade if you can (and if possible).

As these are outside the specifications, you may find that the game won’t run.

Will I do a build guide?

Maybe. I’m no Linus Tech Tips – but I do know my way around a computer and how to build one. Or I can point you in the direction of pre-builds too. I’ll be doing

Suffice to say, those who want to take to the air with the new edition of Flight Simulator don’t have to wait too long.