You are here: Home / New Aircraft News / Qantas’s “Project Sunrise” to proceed – with an Airbus A350

It’s been delayed due to the past two and a bit years, but Qantas is getting ready to kick off its “Project Sunrise“, with an Airbus A350 to deliver it. 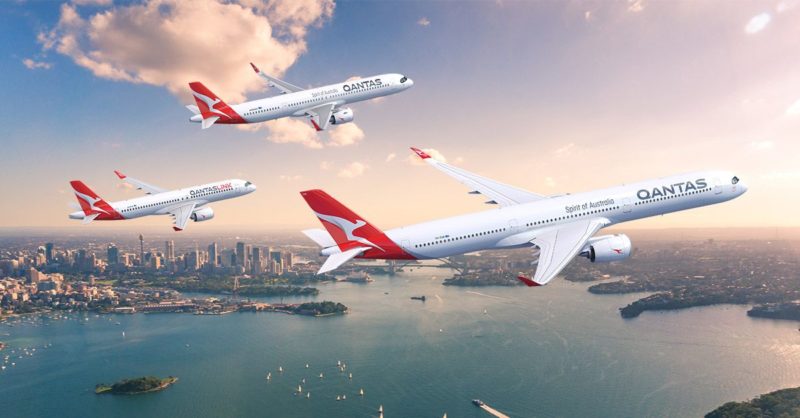 Rather than use the A350-900ULR (which Singapore Airlines uses for its Singapore to Newark NJ fights), it seems the renewal will be centred on the Airbus A350-1000, one of which was spied leaving Toulouse on a non-stop flight to Perth.

Project Sunrise calls for a fleet of 12 Airbus A350-1000 aircraft to operate flights from Australia to other cities including New York and London. These aircraft will feature market-leading passenger comfort in each travel class with services scheduled to start by the end of 2025 from Sydney. They will be configured in a 238 passenger configuration across four classes (First, Business, Premium Economy, Economy), with more than 40 per cent of the cabin dedicated to premium seating.

The airline has published some renderings of its First Class and Well-being zones. Domestically, Qantas will start the renewal of its narrow-body jets as part of ‘Project Winton’ with firm orders for 20 Airbus A321XLRs and 20 A220-300s as its Boeing 737s and 717s are gradually retired. The first of these aircraft will start to arrive in late 2023, with the order including purchase right options for another 94 aircraft for delivery through to at least 2034. The A321XLR will be configured to seat 200 people (20 business, 180 economy class), hoping up a wider range of direct domestic and short-haul international routes (e.g. South East Asia, Pacific islands). Meanwhile, the A220-300 is larger overall than the outgoing 717s and will be configured to seat 137 people (10 in Business, 127 in Economy). It has almost double the range at over 6,000 kilometres, meaning it can fly between any city in Australia according to the airline – and if the range maps are to be believed, maybe further on. Breaking down the full order:

“New types of aircraft make new things possible. That’s what makes today’s announcement so significant for the national carrier and for a country like Australia where air travel is crucial.

“Throughout our history, the aircraft we’ve flown have defined the era we’re in. The 707 introduced the jet age, the 747 democratised travel and the A380 brought a completely new level of comfort. The A350 and Project Sunrise will make any city just one flight away from Australia. It’s the last frontier and the final fix for the tyranny of distance. As you’d expect, the cabin is being specially designed for maximum comfort in all classes for long-haul flying.

“The A320s and A220s will become the backbone of our domestic fleet for the next 20 years, helping to keep this country moving. Their range and economics will make new direct routes possible, including serving regional cities better.

“These newer aircraft and engines will reduce emissions by at least 15 per cent if running on fossil fuels, and significantly better when run on Sustainable Aviation Fuel. This order brings us closer to our commitment to reach net zero emissions by 2050. Project Sunrise will be carbon neutral from day one.

“We have come through the other side of the pandemic a structurally different company. Our domestic market share is higher and the demand for direct international flights is even stronger than it was before COVID. The business case for Project Sunrise has an internal rate of return in the mid-teens.

“The Board’s decision to approve what is the largest aircraft order in Australian aviation is a clear vote of confidence in the future of the Qantas Group. Our strategy for these aircraft will see us generate significant benefits for those who make it possible – our people, our customers and our shareholders.

“The phasing of this order means it can be funded within our debt range and through earnings, while still leaving room for shareholder returns in line with our financial framework.”

It seems the Qantas fleet renewal is in full swing, with the aim to reduce connections, and increase point-to-point flights, whilst modernising the fleet.

The aim to reach any city in the world from Austraila is a bold one – let us not beat around the bush. Whilst it is entirely possible to do this with the promised aircraft (with the reduced seating too, which in no doubt will help in weight reduction and fuel burn and thus increase range), the passenger experience is going to be key. Not just for those in the posh seats, but for everyone.

Whilst a well-being zone is an interesting addition, there’s going to have to be some very important advances in passenger comfort, as well as options to exercise or rest.

It’ll be interesting to see how this shakes out over the next few years.