I think we've all ran into this at least once in our travels - when we book a  window seats, and got no window. What do you do? In the past, I've leaned back or leaned forward. But Japanese Twitter user @kooo_TmS_suke may have accidental hit on a solution. It seems his seat-mate wasn't happy there was no window and told the flight attendant. The flight attendant … END_OF_DOCUMENT_TOKEN_TO_BE_REPLACED It seems I'm not the only person in the world who suffers with Spelling, as Cathay Pacific received a plane from back from Xiamen. And had to send it straight back to the paint shop Oops this special livery won’t last long! She’s going back to the shop! (Source: HKADB) pic.twitter.com/20SRQpKXET — Cathay Pacific (@cathaypacific) September 19, 2018 It seems the … END_OF_DOCUMENT_TOKEN_TO_BE_REPLACED Editors note. I suppose we're in THAT season now, I have to be merry. Or something like that. Some Christmas sweaters are known to be humours... or in very bad taste. KLM is bringing the Christmas season to one and all with the launch of .... wait for it... a sweater. KLM Christmas Jumpers - Image, KLM. The 100% acrylic KLM-blue jumper - Branded "flying home for … END_OF_DOCUMENT_TOKEN_TO_BE_REPLACED Sometimes, you have to wonder about the state of what people were thinking of when they take seflies. This one pretty much takes the biscuit. Here's the video and tweet from ProRail (the rail infrastructure owners in the Nederlands). In de strijd tegen overlast, vandalisme en vertragingen gaat ProRail nóg meer delen van het spoor onder 24-uurs slim cameratoezicht … END_OF_DOCUMENT_TOKEN_TO_BE_REPLACED 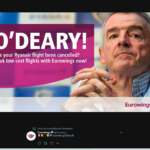 Ryanair continues to be in a bit of a pickle, with 50 flights a day scrubbed from its schedule and crew taking leave rather than £12,000. So it hasn't taken long for Aer Lingus and Eurowings to take revenge in a Ryanair-eque way. First up is Aer Lingus who dropped this lovely one yesterday: We don’t want to see anyone grounded this October, so we've extended our … END_OF_DOCUMENT_TOKEN_TO_BE_REPLACED //FOR RELEASE // - BIRMINGHAM UK/CHICAGO, IL, USA, 1st APRIL 2017  Economy Class and Beyond to abandon use of  spelling checkers and grammar checking software Faster posts will come out More annoying edits Well make some people scream. In a move to make people less happy than normal, Economy Class and Beyond will abandon any illusion of using grammar and spell … END_OF_DOCUMENT_TOKEN_TO_BE_REPLACED It seems that Election Day in the USA has arrived at long, long, long last. Of course, there's plenty of political arguments and handbag fights to come... but for now, Royal Jordan has posted an advert on its Facebook feed, swiping at one of the Election … END_OF_DOCUMENT_TOKEN_TO_BE_REPLACED Well, it's coming to the end of this vicious, painful, moan worthy, mud-slinging  election cycle. No, not Brexit - but the US Election between Puny Human Number One and Puny Human Number Two... But one airline never been shy of controversy - and of course, it's everyone favourite politically correct airline - Ryanair. And it's the usual hilarity as Ryanair take pops at … END_OF_DOCUMENT_TOKEN_TO_BE_REPLACED Jetstar Asia earlier this year did a great April's Fool video about how it was going to introduce Singlish about its planes. Here's the video from it: https://www.youtube.com/watch?v=YaKz1yDJi5M Well.... it seems April Fools can sometimes turn into realities - as Jetstar Asia will be turning some its announcements into Singlish for a day on the 9th August Why? Apart … END_OF_DOCUMENT_TOKEN_TO_BE_REPLACED