Examining the new at AIX18 – FlyBe BE7110 Hamburg to Birmingham

With boarding again at the front of the plane, boarding was a protracted process – that wasn’t helped with the ground crew not releasing the passengers from the transfer buses for a good 5 minutes.

It seems whilst the agents had been given clearance to board the buses, they weren’t expecting us to arrive as quickly as we did. Overhead service unit. Note the air vents are present as well as the information signs.

Aboard the plane, it was back in the land of purple headrests and blue/grey seats. I was a few seats forward that I was before – but still with a view of the engine. 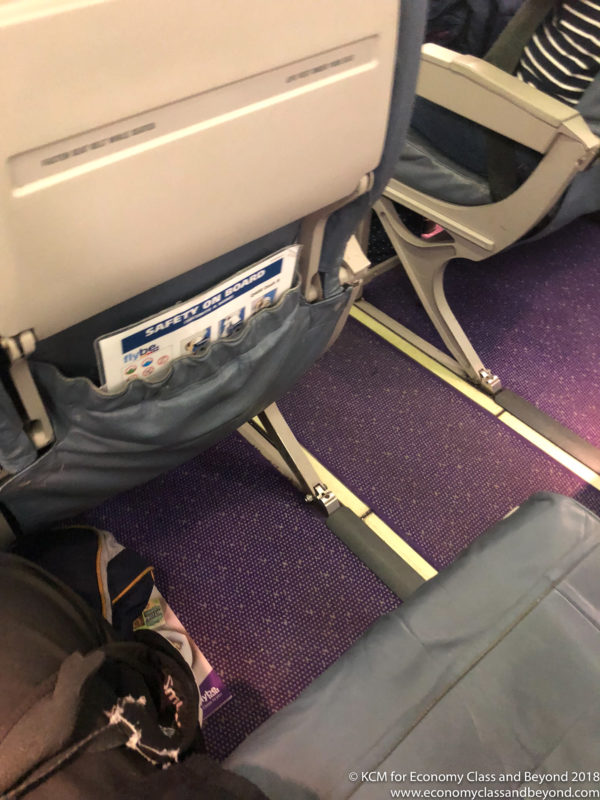 Although I could move sideways. Which is nice.

The seat was the usual flyBe seat. My seatmate for some reason wasn’t happy sitting next to me, and moved up the cabin. I’m not objecting – I was one of three people who had a seat spare next to them on that flight.

With the plane loaded and the cabin secure, a safety check was carried out, and the demonstration was given. With that, our Q400 begun its taxi around Hamburg Airport. Eventually, our plane found a runway, and the engines powered up to take BE7110 into the sky into the night sky Climbing out over Hamburg

With cabin lights on again, came the Flybe sales pitch. Except this time I was remotely interested – mainly as I was after some liquid refreshment. And believe it or not – I was after a bottle of waters. As Hamburg airport is light on water fountains… and me being tight and not wanting to spend €2 on the ground A top tip: Whilst Flybe’s consoles are capable of handling contactless payment for on-board purchases – it will decline any of them. Make sure you have hard cash or a normal bit of plastic to hand with a chip in it.

The flight itself – although it was around the same time as the outbound flight – it seemed to be a lot quicker. The crew was more friendly than the outbound crew and were chatty to customers on the plane.

The crew were also quick on the mark to tidy down the cabin as well – so all the rubbish was well cleared down well ahead of landing. As I couldn’t work out where we were, it was rather welcoming to hear we were on final approach to Birmingham Airport. The cabin was secured for the landing into the airport. With ease BE7110 landed at its home base.

With the plane landing safely at Birmingham Airport, the plane taxied back from the runway to the terminal area. The taxi seemed quick, and soon the plane was parked at the EuroPier – ending the flying part of this trip With BE7110 parked, we were advised that disembarkation would be from the front of the plane only, and onto a bus. Whilst we were next to a jetbridge at the Europier – it seems immigration had gone home for the night at that side of the airport. I thanked the crew and headed onto the tarmac, and the waiting bus. Overall: A lot more friendlier crew on this flight made it a bit more enjoyable. Whilst the delay was unwelcome, the flight was comfortable for the short distance. But I think FlyBe could really do with some new interiors for these planes (with modern seats). That could make a serious improvement to the passenger experience…