Once more unto the tarmac. I was welcomed aboard, and headed to 26A. And I noticed something straight away – these weren’t the norms Aer Lingus Seats (which have winged headrests). Rather, it had Recaro BL3520 seats installed. A few queries found that this was one of two originally destined for Iberia as opposed Aer Lingus.

The BL3520 has had many lines written about it – mainly due to its introduction as the Lufthansa’s NEK Seat, and Recaro commercialising the seat for other operators. It’s not bad per say, but pitched at 30”, it’s not as good as some current designs that are out there in terms of legroom or comfort. With a rather full cabin for the afternoon flight, the cabin crew performed its safety checks, and safety demonstration. Once the formalities complete, the A320 begun the short taxi around Birmingham Airport. Turning to the active.

Soon enough, the plane was directed to the keys, and EI273 took to the sky. The City of Birmingham Climbing through the cloud layer… With a climb out over Birmingham on the port side, the A320 climbed through the cloud layer, heading out towards Liverpool, then out to the Irish sea and Dublin.

In the meantime, the crew kicked off their “Bia” in-flight catering/buy on board service. 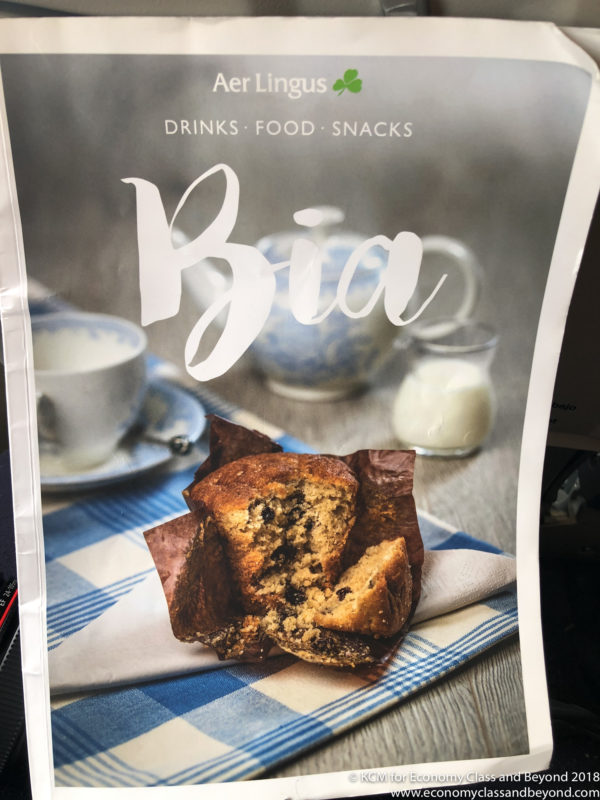 As seemingly the way, there were plenty of takes for beverages on this flight. There was also plenty of takers for on-board shopping (with an amazing amount of Aer Lingus bears being sold on board).

The flight itself was pretty smooth – until EI273 neared its home base of Dublin – where there were a fair amount of bumps as we headed to the ground. With the speed the crew did their service, they cleaned up the plane in preparation for landing. These 45 minute segments can be brutal like this.

None the less, the EI273 cleared the bumps, and with the plane secure, it began its final approach to du and made a gentle landing at Dublin Airport. Closing in – the Mouth of the River Liffy coming into view. Not the clearest day in Dublin.

With the plane landing away from the terminal, the plane begun a long taxi back from the Echo exit, past the Bravos and towards the Terminal 2 complex at Dublin Airport.

On the way, there was a few sights to keep an eye on – one being the Air Peace Boeing 777 that had been a long time resident of the airport, as well as the regular DHL A300. Aer Lingues tails at their home

With a 10 minute taxi, our EI273 pulled up at a gate at T2 attached to the main terminal With the plane parked, the engines spooled down. The sea of humanity woke up and made its way to both the front and rear exits. I chose to join them, and headed to the the rear exit – mainly as it goes to the tarmac – but also as its closest to my seat.

With a breath, I thanked the crew, and headed off the plane.

Overall: Not a bad flight, with a friendly crew. It was a tiny bit bumpy on decent – but nothing major. As usual for a fourty five minute flight – there’s not a lot more you can ask for.

Next: Into Dublin for Donuts… and Pokemon