Table for One, Time for Food
Fall Fun in the Windy City

Time for a hotly anticipated time for food (because we all know this is the fun part of the adventure).

This time, we are going to try a few new places (honest). As well as that, Uber Eats in the USA is in my sights (for someone who hardly uses that platform in the UK, preferring other food platforms), as well as some favourites of the blog.

Yes, it is turning into a tradition I end up here on day one of a trip. Mainly because Asian comfort fast food is sometimes just the done thing – especially after coming off a long-haul flight and spices are needed to rejuvenate some of the things lost at 35,000ft. I chose a combo bowl for $10.99+tax. This came with three gyoza. I selected the chicken rice combo (because noodles at this point weren’t worth considering. My brain only had so much sanity left in it and demanded rice).

It’s not a bad bowl – considering the price and options you could load it up with. As usual, there is a fair amount of salt too, which is to be expected. I had an O’Hare Burger with fries from the Hotel Bar. As I explained in the hotel post, this comes more of “I cannot be bothered to do Uber Eats, and I need to be social” rather than an exploratory choice. The menu at the bar remains limited compared to previous years. The burger was cooked a little pink, but still very edible and not raw. But then again I’m one of these people who don’t do pink meat much… They offer sandwiches, allegedly. Those who think the bread is legally defined as cake (due to the sugar content) with some salty meats are not too far from the truth, I suspect. 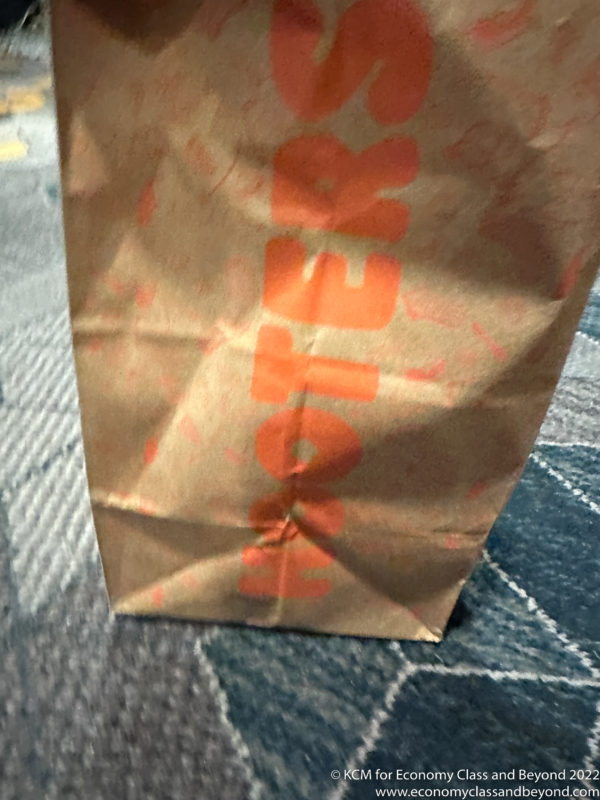 Why yes? I am the very definition of the word classy.

Whilst there may be no orange shorts attached to the wings in the bag, I went for some classic wings and curly fries because I had a busy Saturday evening ahead – and honestly, the sandwich menu at the Hyatt was not tempting me in any sense of the word.

Thankfully things like Uber Eats work (especially when discounts are being thrown around). They were fresh, with the wings still a little crispy, covered in BBQ sauce. It was to the point that other people were salivating at the smell of them. The curly fries were well seasoned – not requiring anything else (although the bbq sauce with the wings made a rather nice dip.

Put it like this, compared to my previous Uber Eats experience, I didn’t feel like I was conned for $21.

And yes, there were plenty of napkins in the bag. A good thing too… I decided that I would be something different to try this trip – so as a fast-food option, I went for a Chick-Fil-A.

I went for a Spicy Chicken Burger Combo meal. With it paid for, I waited a few minutes for my items. When my name was called, I collected them.

And I checked the bag. I had been given Chicken Nuggets, Mac and Cheese and Waffle fries. Hmm. I asked at the counter and explained what I had been given. The worker apologised profusely, allowing me to keep the first meal, whilst getting me my burger and more fries.

No harm done, but at least I had my feast now. The waffles fries are interesting, with a nice texture and seasoned well (although the British person in me wanted some vinegar to put on them).

The spicy chicken burger – I had trouble tasting the spice, to be honest (call it too many years of dousing stuff with chilli flakes, but I had issues identifying heat). The chicken nuggets were a little firm but still edible.

This is a whole different kettle of fish. And a whole article in itself. Next: We need to talk about Pequod’s Pizza.